Back to list
993668
Book The global grapevine : why rumors of terrorism, immigration, and trade matter / Gary Alan Fine, Bill Ellis.

Recommend title
Available: 1
Total number of loans: 0
Loans this year: 0
Number of reservations: 0
Branch availability
Description:
Far from mere idle tales, rumors are a valuable window into our anxieties and fears. Rumors let us talk as a community about some very inflammatory issues; issues that may be embarrassing or disturbing to discuss-allowing us to act as if we are talking about real events, not personal beliefs. We can air our hidden fears and desires without claiming these attitudes as our own. The authors shed light on what contemporary rumors can tell us about the fears and pressures of globalization. In particular, they examine four major themes that emerge over and over again: rumors about terrorism, about immigration, about international trade, and about tourism. The authors analyze how various rumors underscore American reactions to perceived global threats, show how we interpret our changing world, and highlight fears, fantasies, and cherished beliefs about our place in the world. Along the way the book examines a wide variety of rumors-that the Israelis were behind 9-11, the President knew of the attack in advance, tourists wake up in foreign countries with their kidneys stolen, foreign workers urinate in vats of beer destined to be shipped to America. These rumors, the authors argue, reflect our anxieties and fears about contact with foreign cultures-whether we believe foreign competition to be poisoning the domestic economy or that foreign immigration to be eroding American values. Rumors are the visible tip of a vast iceberg of hidden anxieties. Illuminating the most widely circulated rumors in America in recent years, The Global Grapevine offers an invaluable portrait of what these tales reveal about contemporary society
Introduction : rumor : plausible and credible -- Rumor and September 11th : understanding the unthinkable -- A riot of conspiracies -- Migrants : disease in the body politic -- "There goes the neighborhood" : Latino migrants and immigration rumors -- Tourist troubles : the travels of global rumor -- The menace of international trade -- Global trafficking in bodies -- Whispers on the borderline.

Taking control of anxiety : small steps for getting the best of worry, stress, and fear
Author: Moore, Bret A
988732 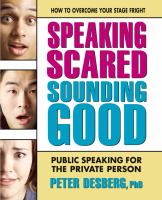