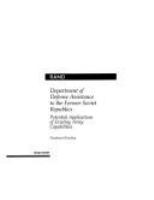 Recommend title
Available: 0
Total number of loans: 0
Loans this year: 0
Number of reservations: 0
Branch availability
Description:
This report explores the feasibility of U.S. Army roles in twelve former Soviet republics and assesses the costs, benefits, and risks of potential Army missions. It focuses on roles that replicate or build on existing Army and DoD assistance programs, especially "dual-purpose" missions that would serve both Army and host-nation interests. The study concludes that although few roles would fully meet key "dual-purpose" criteria, the Army could undertake some modest aid actions in the twelve republics--swiftly and at relatively low cost--that it routinely performs in other countries for largely self-interested reasons. The most promising could be built around small-scale nation assistance actions, primarily involving Reserve Component medical and engineer units, which the Army regularly conducts throughout the developing world, typically in conjunction with scheduled training activity. While the study findings do support a modest Army aid role, they cannot support a recommendation that the Army undertake specific actions absent key situational factors. However, they do argue that the Army's potential as an aid instrument be brought into sharper relief as an instrument available to policymakers.

Examination of the military assistance program administered by the Department of the Army : report to the Congress of the United States
Author: United States. General Accounting Office.
1084103