Recommend title
Description:
The author examines statesmen, generals, and admirals for strengths and weaknesses in this compelling study of leadership in the nineteenth and early twentieth centuries. He examines how the difficulties they faced and the political and strategic backgrounds of their days and analyses how they performed and what they achieved. Were they successful, or were they beaten down by the burden of their roles? His book considers men from very different backgrounds and from three continents in a range of modern conflicts from the Napoleonic Wars to the Second World War. These leaders present fascinating contrasts of personal character, styles of leadership and sheer aptitude for command as well as contrasts in the daunting professional problems that challenged each of them. As a master in the field of strategic history, the author yet again demolishes hallowed reputations and rehabilitates the unjustly scapegoated.
part I : The nineteenth century. The romantic ideal of leadership : Napoleon Bonaparte -- Crusader with a blunt sword : Abraham Lincoln and the failing generals -- A study in contrast : Ulysses S. Grand and Robert E. Lee -- The calculator of victory : Helmuth, Graf von Mltke and the Wars of Bismarck -- The price of incompetence : Napoleon III and his marshals -- part II : The Great War 1914-1918. Nerve and loss of nerve : General Joffre versus Moltke the younger -- Stalemate and scapegoat : General Sir Douglas Haig -- Brilliance and betrayal : David Lloyd George as war premier -- The saviour of an army : Maréchal Pétain and the French mutinies -- Leader to catastrophe : first Quartermaster General General Erich Ludendorff -- The victor of 1918 : Field Marshal Sir Douglas Haig -- pt. III : the Second World War 1939-1945. Leader from the Front : Generalfeldmarschall Erwin Rommel -- The reluctant gambler : Admiral Isoruku Yamamoto -- Fire-raiser in chief : Air Chief Marshal Sir Arthur Harris -- From defeat into victory : General Sir William Slim -- Neptune's admiral : Admiral Sir Bertram Ramsay -- Coalition Supreme Commander : General Dwight D. Eisenhower -- Stalin's marchal : Marshal Georgi Zhukov -- Spellbinder and fantasist : Adolf Hitler -- Victory at all cost : Winston Churchill.

The Battle of El Alamein : decision in the desert
Author: Barnett, Correlli
1091480 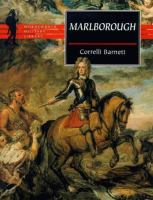 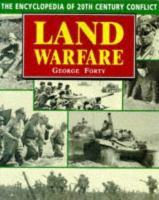 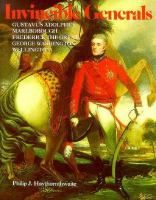 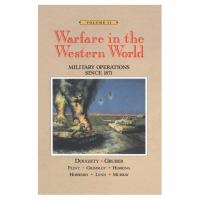 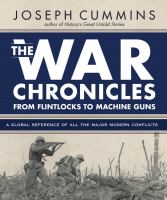 The war chronicles, from flintlocks to machine guns : a global reference of all the major modern conflicts
Author: Cummins, Joseph
1102493 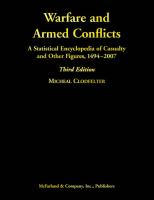 The writing of official military history
1085779