Recommend title
Description:
The essays in this book are intended to inform leaders, and the general public, about the challenges of ethical decision making, the application of the law of war, and the important role of spirituality. Aspects of Leadership will educate readers and generate important questions that leaders should ask themselves, encouraging them to reflect upon their pivotal roles in these three areas.
Introduction / Carroll Connelley -- ETHICS. Leadership, ethics and culture in COIN operations : case examples from Marjeh, Afghanistan / Brian Christmas and Paula Holmes-Eber -- Ethics and irregular warfare : the role of the stakeholder theory and care ethics / Geoffroy Murat -- A pedagogy of practical military ethics / Clinton A. Culp -- Leadership in a world of blurred responsibilities / Emmanuel R. Goffi -- When loyalty to comrades conflicts with military duty / J. Peter Bradley -- Leadership and the ethics of dissent : reflections from the Holocaust / Paolo Tripodi -- Enacting a culture of ethical leadership : command and control as unifying mind / Clyde Croswell and Dan Yaroslaski -- LAW. Training the rules of engagement for the counterinsurgency fight / Winston Williams -- Rules of engagement : law, strategy, and leadership / Laurie R. Blank -- Humanity in war : leading by example; the role of the Commander in modern warfare / Jamie A. Williamson -- Agency of risk : the balance between protecting military forces and the civilian population / Chris Jenks -- Accountability or impunity : rules and limits of command responsibility / Kenneth Hobbs -- SPIRITUALITY. Spiritual injuries : wounds of the American warrior on the battlefield of the soul / David Gibson and Judy Malana -- Soldier spirituality in a combat zone : preliminary findings / Franklin Eric Wester -- The spiritual as nexus for the ethical and the legal / Jeffrey S. Wilson -- The religious factor in military leadership / Paula Otis -- Spiritual leadership in the battle space : who is in charge? : a personal essay / Arnold Fields. 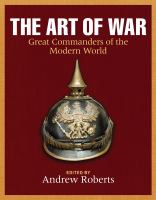 Risk management for brigades and battalions
1127595

Command and control of combat operations
1104694

The Chiefs of Staff, United States Army, on leadership and the profession of arms
Sign in
Forgot your PIN code?