A proof of concept for collecting and analyzing open source information in universities for the purpose of identifying over-the-horizon threats to selected items on the military critical technologies list
Author: Perry, William G
992897 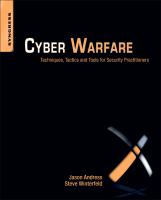 The dark sides of the Internet : on cyber threats and information warfare
Author: Heickero, Roland
1174519

Making strategic sense of cyber power : why the sky is not falling
Author: Gray, Colin S
1174797

Ethics and cyber warfare : the quest for responsible security in the age of digital warfare
Author: Lucas, George R
Sign in
Forgot your PIN code?