Recommend title
Description:
This richly textured, critically acclaimed portrait of American Muslims introduces basic tenets of the Muslim faith, surveys history of Islam in North America, and profiles lifestyles, religious practices, and world views of Muslims in United States. The volume focuses specifically on difficulty of living faithfully and adhering to tradition while adapting to an American way of life and addresses the role of women in Muslim culture, raising and education of children, appropriate dress and behavior, and incidences of prejudice and unfair treatment. The second edition of Islam in America features a new chapter on post-9/11 realities, which covers infringements on civil rights and profiling, participation in politics, transformations in Islamic law, pluralism and identity issues, foreign influences, anti-Islamic sentiment, intra-Islamic tensions, and quest for a moderate Islam. Source notes, glossary, and additional resources reflect recent developments and scholarship--Publisher's description.
Introduction -- Muslim faith and practice -- Contributors to the development of Islam -- Islam comes to America -- Islam in the African American community -- The public practice of Islam -- Women and the Muslim American family -- Living a Muslim life in American society -- Islam in America post-9/11.

Islam in Southeast Asia : political, social and strategic challenges for the 21st century
1030122

Alternative measures : Homeland Security, the ultimate power of the protection of the United States, had no knowledge of an internal strike force operating within its ranks for one purpose, to pay back the terrorist responsible for September 11, 2001
Author: Mars, Peter
995613

Islamophobia : the challenge of pluralism in the 21st century
1031616

All for one : terrorism, NATO and the United States
Author: Lansford, Tom
1155757 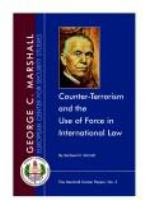 Counter-terrorism and the use of force in international law
Author: Schmitt, Michael N
1043968

The globalization of terror : the challenge of Al-Qaida and the response of the international community
Author: Schweitzer, Yoram
Sign in
Forgot your PIN code?