Skip to Content
Sign In
Advanced search
3107
Go to first page   Go to previous page   9 10 11 12 13 Go to next page   Go to last page
Back to list
991003
Book The military's role in counterterrorism : examples and implications for liberal democracies / Geraint Hughes.

Recommend title
Description:
"This Letort paper ... argues that there are contingencies in which democratic states are obliged to employ military means in order to protect their citizens from the threat of terrorism, whether in a purely domestic context or when facing a transnational terrorist network such as al-Qaeda. While outlining the specific roles that armed forces can perform (including hostage rescue, military aid to the civil authority, interdiction, and intelligence-gathering), this paper also describes the strategic, political, diplomatic, and ethical challenges that arise from using military means to fight terrorism either on one's home soil or in the international arena. This paper's principal conclusion is that democratic governments can use their armed forces if the existing police/judicial framework cannot address the threat posed by terrorists, but that military means have to be integrated as part of an overarching strategy to contain terrorism and to limit the capacity of its practitioners to conduct attacks against citizens. The author also outlines a series of questions that civilian decisionmakers should ideally resolve prior to turning counterterrorism mission over their military counterparts"--Summary.
Is terrorism a military problem? -- The military's role in counterterrorism -- Problems arising from military involvement in counterterrorism : the international context -- Problems arising from military involvement in counterterrorism : the domestic context.

The civilian-military divide : obstacles to the integration of intelligence in the United States
Author: Stanton, Louise 1955-
1031852

They just don't get it : how Washington is still compromising your safety, and what you can do about it
Author: Hunt, David Colonel, 1947-
1104550

Your government failed you : breaking the cycle of national security disasters
Author: Clarke, Richard A 1951-
1046810 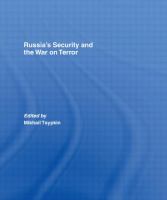 Going to war with the allies you have : allies, counterinsurgency, and the War on Terrorism
Author: Byman, Daniel 1967-
Sign in
Forgot your PIN code?