Recommend title
Description:
"This book surveys Borneo under Western colonialism, examines pre-war Japanese interests in Borneo, and analyses the Japanese military invasion and occupation. It goes on to consider the nature of Japanese rule in Borneo, contrasting the different regimes of the Imperial Japanese Army, which ruled the north, and the Navy, which ruled the south. A wide range of issues are discussed, including the incorporation of the economy in the Greater East Asia Co-prosperity Sphere and the effects of this on Borneo's economy. The book also covers issues such as the relationship with the various indigenous inhabitants, with Islam and the Muslim community, and the Chinese, as well as topics of acculturation and propaganda, and major uprisings and mass executions. It examines the impact of the wartime conditions and policies on the local multi-ethnic peoples and their responses, providing an invaluable contribution to the greater understanding of the significance of the wartime Japanese occupation in the historical development of Borneo"--P. [4] of cover.
Pre-war Borneo -- On the road to war -- The Japanese invasion and occupation of Borneo -- The partition of Borneo -- Kita Boruneo -- Minami Boruneo -- Atrocities, opposition and response -- Between generals and admirals -- End of an era. 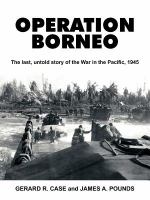 Decisions on names in Brunei, North Borneo, and Sarawak
Author: United States Board on Geographic Names.
942616

Characteristics and use of red candles
1072698

Reports of incidence of disease
922657

Treaty of peace with Japan signed at San Francisco, September 8, 1951, with related documents
928494

Draft treaty of peace with Japan : with draft declarations by the Government of Japan
Sign in
Forgot your PIN code?