Skip to Content
Sign In
Advanced search
4402
Go to first page   Go to previous page   4 5 6 7 8 Go to next page   Go to last page
Back to list
979148
Book Orphans of the Republic : the nation's legislators in Vichy France / Olivier Wieviorka ; translated by George Holoch.

Recommend title
Description:
"On July 10, 1940, by a 570 to 80 margin, the deputies and senators in the French parliament voted full powers to Philippe Pétain, a man who was no friend to democratic institutions. The vote ended the Third Republic and paved the way for the collaborationist Vichy regime ... Pétain claimed to be saving France from ruin. The day of the vote has been described as the 'journée des dupes', the legislators so ignorant or fearful that they voted without a thought to the consequences. But [Olivier] Wieviorka shows that most of the deputies made a considered decision to vote for Pétain. He analyzes the factors, including political culture, party affiliation, and regional origins, that motivated the voting on both sides and traces the men's sometimes surprising fates through the war"--Dust jkt.
Introduction : in search of meaning -- The rules of the game -- Politics first? -- Here we stand, Maréchal? : July 1940 to November 1942 -- Parting the waters : 1942-1944 -- Purge.

Overlord coastline : a history of D-Day with special emphasis on what can be seen today
Author: Chicken, Stephen H
951558

The islands in the Bay of Biscay between the mouth of the Gironde and the Loire
Author: Gallenkamp, C b. 1890.
943652 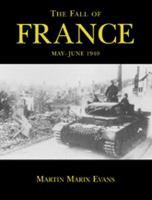 The fall of France : act with daring
Author: Marix-Evans, Martin
960402

France under the Germans : collaboration and compromise
Author: Burrin, Philippe 1952-
974920