Virginia military records : from the Virginia magazine of history and biography, the William and Mary College quarterly, and Tyler's quarterly
1088859 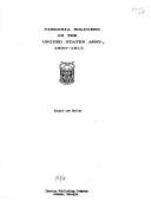 A Record of the Revolutionary soldiers buried in Lake County, Ohio : with a partial list of those in Geauga County and a membership roll of New Connecticut Chapter, Daughters of the American Revolution
1097516

Index to Revolutionary soldiers of Indiana and other patriots
Author: Wolfe, Barbara Schull
1084113

Pennsylvania soldiers of the Revolutionary War, living in states other than PA
Author: Myers, Paul W
1059395