Recommend title
Description:
A major revision of our understanding of long-range bombing, this book examines how Anglo-American ideas about "strategic" bombing were formed and implemented. Biddle argues that ideas about bombing civilian targets rested on, and gained validity from, widespread but substantially erroneous assumptions about the nature of modern industrial societies and their vulnerability to aerial bombardment. These assumptions were derived from social and political context of the day and were maintained largely through cognitive error and bias. Tami Davis Biddle explains how air theorists, and those influenced by them, came to believe that strategic bombing would be an especially effective coercive tool and how they responded when their assumptions were challenged. Biddle analyzes how a particular interpretation of the World War I experience, together with airmen's organizational interests, shaped interwar debates about strategic bombing and preserved conceptions of its potentially revolutionary character. This flawed interpretation as well as a failure to anticipate implementation problems were revealed as World War II commenced. By then, the British and Americans had invested heavily in strategic bombing. They saw little choice but to try to solve the problems in real time and make long-range bombing as effective as possible. Combining narrative with analysis, this book presents the first-ever comparative history of British and American strategic bombing from its origins through 1945. In examining the ideas and rhetoric on which strategic bombing depended, it offers critical insights into validity and robustness of those ideas, not only as they applied to World War II but as they apply to contemporary warfare.
The beginning: strategic bombing in the First World War -- Britain in the interwar years -- The United States in the interwar years -- Rhetoric and reality, 1939-1942 -- The combined bomber offensive, 1943-1945.

Relationship between the size of the attacking force and the amount of battle damage and loss suffered by heavy bombardment aircraft in the VIII Bomber Command, 3 January through 30 July 1943
1096803

A history of strategic bombing
Author: Kennett, Lee B
1040332 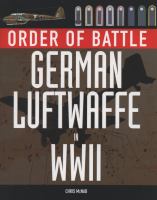