Recommend title
Description:
This monograph examines the fundamental argument that America's adversaries are shifting more toward irregular methods due to the demonstrated prowess of the U.S. military at conventional warfare. This argument is based on what one might call a paradoxical logic, not unlike that described by Edward Luttwak in his classic work, Strategy. Among other things, the monograph concludes that few genuine paradoxes exist in war; most principles that appear paradoxical are completely linear. Moreover, those adversarial states and nonstate actors employing irregular methods today were doing so long before the U.S. military demonstrated its superiority at conventional warfare, and will likely continue to do so.
Dissolving paradoxes -- Dissolving strategic paradoxes -- Dissolving the preparation paradox.

Insurgents, raiders, and bandits : how masters of irregular warfare have shaped our world
Author: Arquilla, John
1166592 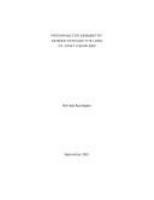 Preparing for asymmetry : as seen through the lens of Joint Vision 2020
Author: Applegate, Melissa A
916225

Future land battlefield : weapons and doctrine for the 21st Century
1113980

A nation at war in an era of strategic change
Author: Murray, Williamson
990934

Puncturing the counterinsurgency myth : Britain and irregular warfare in the past, present, and future
Author: Mumford, Andrew 1983-
1193695