Recommend title
Description:
"With this third and final monograph in the series, the author explores the centrality of Human Intelligence (HUMINT) in meeting the needs of the U.S. Army, as well as the Department of Defense (DoD), and the whole of government, for relevant information and tailored intelligence essential to creating a national security strategy; for defining whole government policies that work in harmony; for acquisition of the right capabilities at the right price in time to be useful; and for operations, both local and global. The author outlines 15 distinct types of HUMINT, only four of which are classified (defensive and offensive counterintelligence, clandestine operations, and covert action), with the other 11 being predominantly unclassified. Additionally, he argues that they are completely lacking in integrated management or innovative leadership. The author, well-grounded in the literature of how complex organizations fail and how resilience and sustainability can be achieved though collective intelligence, offers the U.S. Army an orientation to a world in which thinkers displace shooters as the center of gravity for planning, programming, and budgeting, as well as the proper structuring of mission mandates, force structures, and tactics and techniques to be used in any given mission area"--Foreword.
Preface -- From base force to core force and beyond -- The U.S. Army, the DoD, and the republic -- Digital natives -- Introduction -- Threats, strategy, force structure, and action-spending plans -- A nation's best defense -- HUMINT for the President -- HUMINT for the Secretary -- The failure of HUMINT part I (stovepipes, segregation, and secrecy) -- The future of HUMINT (broadly and properly defined) -- HUMINT : defining and managing the fifteen slices -- Citizen as sensor and sense-maker -- Soldier as sensor (overt/open signals) -- Operational Test & Evaluation (OT&E) -- Inspector-General (Organizational, USG, International) -- Security observation/remote webcams/floating periscopes -- Document exploitation/imagery -- All-source analysts & global experts -- Defense attachés, technical liaison -- Human terrain teams -- Interrogator-translator teams -- Soldier as sensor (patrolling, force reconnaissance, covert "hides") -- Defensive counterintelligence -- Offensive counterintelligence -- Covert action HUMINT -- Clandestine HUMINT -- HUMINT requirements and collection management -- HUMINT interdisciplinary support -- Conclusion : the HUMINT playing field -- HUMINT and whole of government force structure -- HUMINT technologies : enabling not defining HUMINT -- HUMAN : the essence of the republic, of Defense, of the U.S. Army -- What has changed? -- Recommendations.

The civilian-military divide : obstacles to the integration of intelligence in the United States
Author: Stanton, Louise 1955-
1118675 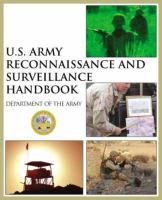 Breaking the saber : the subtle demise of cavalry in the future force
Author: Rosenberger, John D
1100421

Spies in uniform : British military and naval intelligence on the eve of the First World War
Author: Seligmann, Matthew S 1967-
916230

Intelligence agencies of the United States
Sign in
Forgot your PIN code?