Recommend title
Description:
The Chinese government is using space power to increase its influence at home and abroad and hopes to leverage the political, economic, and military benefits of space to become a great power. The ambivalent nature of the U.S.-China relationship, however, assures that over the long term China's rise as a space power will present challenges to the United States. Militarily, China's improved remote sensing capabilities and launch tempos require the U.S. military to prepare to counteract China's use of space in a potential conflict over Taiwan. Commercially, China's lower labor costs and mercantilist approach to space could establish China as a competitive market force. Politically, U.S. diplomats must recognize the role Chinese space activities plays in diplomacy and be prepared to ameliorate cooperative activities that impinge on U.S. national security. Despite these drawbacks, cooperation with China cannot be ruled out. Cooperation can improve scientific research, increase safety, and make an opaque program more transparent, but should not directly improve China's military or commercial capabilities. Consequently, the U.S. response to China's rise as a space power should take a balanced approach in which challenges are managed and opportunities exploited.
Goals -- Tenth five-year plan accomplishments -- Assessment -- The future -- The benefits of a space program: fitting space power into China's grand strategy -- The implications of the rise of China's space program for U.S. interests -- The U.S. response: contain, compete, cooperate, or do nothing? -- Seeking tangible results.

On the edge of Earth : the future of American space power
Author: Lambakis, Steven James
1045320

The national space program from the fifties into the eighties
Author: Schichtle, Cass
991455

The organization of the United States national space effort : staff study of the Committee on Science and Astronautics, U.S. House of Representatives, Eighty-seventh Congress, first session.
1037271

The space problem : will a military advantage accrue to the U.S. and to the Air Force through the development of a space capability?
1023130

Exploring the unknown : selected documents in the history of the U.S. civil space program
1051399 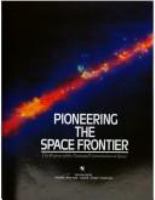