Skip to Content
Sign In
Advanced search
1635
Go to first page   Go to previous page   1 2 3 4 5 Go to next page   Go to last page
Back to list
916412
Book The implications of preemptive and preventive war doctrines : a reconsideration / Colin S. Gray.

Recommend title
Description:
Preemption and prevention are different concepts. To preempt is to attempt to strike first against an enemy who is in the process of preparing, or is actually launching, an attack against you. Preemption is not controversial. The decision for war has been taken out of your hands. Prevention, however, is a decision to wage war, or conduct a strike, so as to prevent a far more dangerous context maturing in the future. To decide on preventive war is to elect to prevent a particular, very threatening strategic future from coming to pass. Despite much legal argument, there is no legal difficulty with either concept. The UN Charter, with its recognition of the inherent right of sovereign states to self-defense, as generally interpreted around the world does not require a victim or target state to suffer the first blow. To strike preventively in self-defense is legal, though it will usually be controversial. Preventive war is simply war, distinguishable only by its timing, and possibly its motivation.
Introduction: a confused debate -- Definitions -- Law and culture -- Strategic history -- Debating prevention -- Strategic theory and preventive war -- Key implications of the concepts of preemption and prevention for policy and strategy.

Hard power and soft power : the utility of military force as an instrument of policy in the 21st century
Author: Gray, Colin S
916245

Irregular enemies and the essence of strategy : can the American way of war adapt?
Author: Gray, Colin S
916605 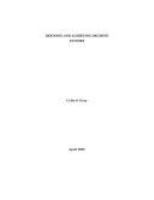 War, peace, and victory : strategy and statecraft for the next century
Author: Gray, Colin S
1011542

The geopolitics of the nuclear era : heartland, rimlands, and the technological revolution
Author: Gray, Colin S
1025082

War, peace, and victory : strategy and statecraft for the next century
Author: Gray, Colin S

Beyond preemption : force and legitimacy in a changing world
1115175

Fighting in the gray zone : a strategy to close the preemption gap
Author: Fish, Joanne M
1030673

Coercion : the power to hurt in international politics
1194852