Skip to Content
Sign In
Advanced search
5036
Go to first page   Go to previous page   8 9 10 11 12 Go to next page   Go to last page
Back to list
915457
Book History's shadow : Native Americans and historical consciousness in the nineteenth century / Steven Conn.

Recommend title
Description:
"This book traces the struggle of Americans trying to understand the people who originally occupied the continent they now claimed as their own. The question of the Indian, Steven Conn argues, compelled Americans to define new fields of study, such as archeology, ethnology, and linguistics. Even more important, the presence of Native American culture forced Americans to confront the meaning of history itself; how it should be studied, what drove its processes, and where it might ultimately lead. The encounter with Native Americans, Conn argues, changed the very way Americans conceived of their own history" -- Publisher's description.
Native Americans and the problem of history, part 1 -- Images of history : Indians in American art -- Fade to silence : Indians and the study of language -- The past is underground : archeology and the search for Indian history -- The art and science of describing and classifying : the triumph of anthropology -- Native Americans and the problem of history, part 2.

The United States Army and the Indian Wars in the trans-Mississippi West : 1860-1898
Author: US Army Military History Institute.
980743 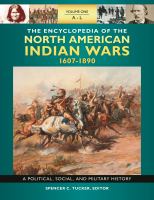 The descent of Indian territory into the Civil War
Author: Scoopmire, Leslie Barnes
964474

The problem of Indian administration : report of a survey made at the request of Honorable Hubert Work, secretary of the interior, and submitted to him, February 21, 1928
Author: Brookings Institution. Institute for Government Research.
1041391