Recommend title
Description:
"In December 1777, the Continental army was encamped at Valley Forge and faced weeks of cold and hunger, as well as the prospect of many troops leaving as their terms expired in the coming months. If the winter were especially cruel, large numbers of soldiers would face death or contemplate desertion. Plans were made to enlist more men, but as the states struggled to fill quotas for enlistment, Rhode Island general James Mitchell Varnum proposed the historic plan that a regiment of slaves might be recruited from his own state, the smallest in the union, but holding the largest population of slaves in New England. The commander in chief|s approval of the plan would set in motion the forming of the 1st Rhode Island Regiment. The 'black regiment,' as it came to be known, was composed of indentured servants, Narragansett Indians, and former slaves. This was not without controversy. While some in the Rhode Island Assembly and in other states railed that enlisting slaves would give the enemy the impression that not enough white men could be raised to fight the British, owners of large estates gladly offered their slaves and servants, both black and white, in lieu of a son or family member enlisting. The regiment fought with distinction at the battle of Rhode Island, and once joined with the 2nd Rhode Island before the siege of Yorktown in 1781, it became the first integrated battalion in the nation|s history. In From Slaves to Soldiers: The 1st Rhode Island Regiment in the American Revolution, historian Robert A. Geake tells the important story of the 'black regiment' from the causes that led to its formation, its acts of heroism and misfortune, as well as the legacy left by those men who enlisted to earn their freedom" -- Publisher's description.
The origins of the 1st Rhode Island Regiment -- From slaves to soldiers -- Battles, blood, and brotherhood -- The aftermath of war -- The legacy of the 1st Rhode Island Regiment.

An historical inquiry concerning the attempt to raise a regiment of slaves by Rhode Island during the War of the Revolution
Author: Rider, Sidney S 1833-1917.
956864 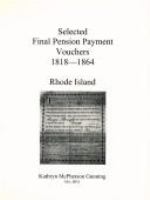 Rhode Island repudiation, or, The history of the revolutionary debt of Rhode Island : in three chapters
Author: Richmond, John W 1775-1857.
1074012