Recommend title
Description:
"This book offers a bold re-interpretation of the prevailing narrative that US foreign policy after the Cold War was a failure. In chapters that retell and reargue the key episodes of the post-Cold War years, Lynch argues that the Cold War cast a shadow on the presidents that came after it and that success came more from adapting to that shadow than in attempts to escape it. When strategic lessons of the Cold War were applied, presidents fared better; when they were forgotten, they fared worse. This book tells the story not of a revolution in American foreign policy but of its essentially continuous character from one era to the next. While there were many setbacks between the fall of Soviet communism and the opening years of the Trump administration, from Rwanda to 9/11 and Iraq to Syria, Lynch demonstrates that the United States remained the world's dominant power." -- Publisher's web site.
Introduction. -- George H. W. Bush new world order, old world president, 1989-1992 -- Bill Clinton new think, 1993-1996 -- Bill Clinton : the return of old think, 1997-2000 -- George W. Bush : a new Cold War, 2001-2004 -- George W. Bush : Truman redux, 2005-2008 -- Barack Obama's flexible response, 2009-2012 -- Barack Obama's soft containment, 2013-2017 -- Conclusion : Donald Trump and the end of the Cold War shadow? 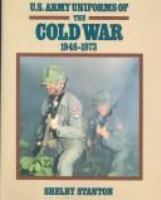 Innocent weapons : the Soviet and American politics of childhood in the Cold War
Author: Peacock, Margaret
1101174

The reluctant sheriff : the United States after the Cold War
Author: Haass, Richard
1176423

Warming up to the Cold War : Canada and the United States' coalition of the willing, from Hiroshima to Korea
Author: Teigrob, Robert 1966-
988645

From collaboration to deterrence : the United States, the United Nations and the Cold War, 1945-50
Author: Nishizaki, Fumiko
Sign in
Forgot your PIN code?