Recommend title
Description:
This Note describes a program called SWIRL, designed for simulating military air battles. The Note serves three purposes: (1) It is a user's guide to SWIRL. Those wishing to run SWIRL, and to some extent modify its behaviors, can use this Note as a guide. (2) The Note provides an extensive example of a simulation written in the ROSS language for those wishing to examine how one might design and build a simulation in ROSS. (3) At a more general level, the Note focuses on some important techniques for constructing simulations in an object-oriented programming environment. The Note describes the design and implementation of SWIRL and includes all of the SWIRL code and documentation. SWIRL embodies an air penetration simulation of offensive forces attacking a defensive area. Objects represented include offensive penetration, defensive radars (both ground and air), SAMs, missiles, filter centers, defensive fighters, command centers and targets.

The complete wargames handbook : how to play, design, and find them
Author: Dunnigan, James F
1038237 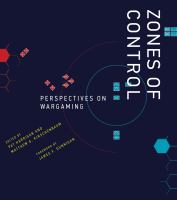 Zones of control : perspectives on wargaming
930340

The art of wargaming : a guide for professionals and hobbyists
Author: Perla, Peter P
1048420

Peter Perla's the art of wargaming : a guide for professionals and hobbyists
Author: Perla, Peter P
1193358

WLTAE : an HLA federation for logistics and warfighting models
1191971