Recommend title
Description:
This report presents a conceptual framework of reserve components. The focus is on the Selected Reserves of the U.S. Army. The guiding principle of the report is that reserve components are more than just an organizational variation of active components. The core characteristics of the reserve components are highlighted by an organizational contrast with active-duty components and by a comparative contrast of American reserves with those of other Western countries. The following variables differentiate reserves from active-duty components: (1) Normative motivation is a significant factor; (2) Military Occupational Specialty mismatch is a problem; (3) Family conflict is greater with seniors than juniors; and (4) Career development increasingly comes into conflict with the pressures of demanding civilian occupations. Comparative analysis identified the following as the unique elements of the American reserves face exceptional conflict between reserve duties and civilian employment responsibilities. Such conflict promises to become more severe as reserve components become increasingly integrated with the active force under Total Force concepts. This report makes policy recommendations based on the analysis.

The sociology of the Army Reserves : a comparative assessment
Author: Moskos, Charles C
1103200

Reporting war when there is no war : the media and the military in peace and humanitarian operations
Author: Moskos, Charles C
1106793

The media and the military in peace and humanitarian operations
Author: Moskos, Charles C
1145846

All that we can be : Black leadership and racial integration the Army way
Author: Moskos, Charles C

The sociology of the Army Reserves : a comparative assessment
Author: Moskos, Charles C
1028954

Staff study on career development of officers in functional areas
Author: United States. Department of the Army. Office of the Deputy Chief of Staff for Personnel,
921468

The yin and yang of junior officer learning : the historical development of the Army's Institutional Education Program for Captains
Author: Jordan, Kelly C 1964-
983490 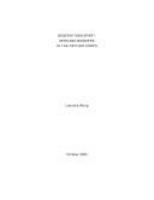 An exploration of how U.S. Army officers attending the U.S. Army Command and General Staff College decide whether or not to attend graduate school : a qualitative case study
Author: Vance, Charles David
1187650