Recommend title
Description:
"In The Medal of Honor, Dwight Mears takes a comprehensive look at the historical, legal, and policy underpinnings of the Medal of Honor (often referred to as the Congressional Medal of Honor), America's highest military decoration for valor in combat. In recent years the medal's eligibility criteria have been largely standardized among all military services. Prior to 1963, however, different criteria for the Medal of Honor existed between the Army and the Navy due to different controlling statutes and policies as well as divergent perceptions about the award's purpose. The early twentieth century was a turning point for both military services, as the period saw the codification of legislation designed to keep the award from undeserving recipients, largely in reaction to perceived legal and policy errors or omissions of the past. The medal's continued statutory and policy evolution has produced a number of contemporary concerns, including perceptions that bureaucratic and legislative barriers have effectively pushed the decoration out of reach of deserving service members, and that remedies were necessary to correct for past discrimination that resulted in the unfair downgrade of many awards in earlier conflicts. Existing literature on the Medal of Honor avoids in-depth analysis, preferring instead to focus on the most deserving recipients in different periods of US history. Due to its depth and comprehensiveness, The Medal of Honor is likely to be the definitive book on the subject." -- Provided by publisher.
Preface -- Introduction -- Part 1. Legal and policy history. From the Revolution through the Civil War : background and inception -- Filling the Army's policy vacuum : 1876-1897 -- The Spanish-American War, Veracruz, and Navy officers : 1898-1915 -- The Purge of 1917 : The Army rewrites its award history -- World War I : The birth of the pyramid of honor -- The inter war period : a bifurcated Medal of Honor and new decorations -- World War II: growing pains and the end of noncombat awards -- The Korean and Vietnam Wars : new combat thresholds -- Post-Vietnam : modern concern over the decline in award frequency. -- Part 2. Exceptions to the rules : legislative, administrative, and judicial relief. Early bills of relief and extra legislative awards -- Modern bills of relief : 10 U.S.C. [Section] 1130 -- Administrative remedies : Boards for Correction -- Administrative restorations : Mary Walker and William Cody -- Judicial remedies : the Administrative Procedure Act -- Correction of discrimination or impropriety -- Conclusion -- Appendix : Summary of Medal of Honor legislation (excluding bills of relief).

Medal of Honor, 1863-1968 : "In the name of the Congress of the United States"
Author: United States. Congress. Senate. Committee on Labor and Public Welfare. Subcommittee on Veterans' Affairs.
1038943 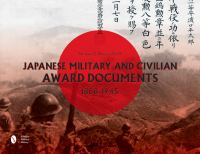 American society medals : an identification guide : together with basic criteria for membership qualification in most of those societies whose medals are illustrated, plus historical notes and a color ribbon chart
Author: Bishop, Lee E
1058576