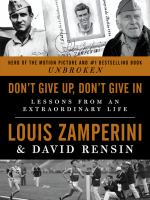 Recommend title
Description:
"Completed just two days before Louis Zamperini's death at age 97, Don't Give Up, Don't Give In shares a lifetime of wisdom, insight, and humor from one of America's most inspiring lives... Now, in his own words, Louis Zamperini reveals, with warmth and great charm, the essential values and lessons that sustained him throughout his remarkable journey. He was a youthful troublemaker from California who turned his life around to become a 1936 Olympian and a world-class miler at the University of Southern California. Putting aside his superstar track career, Louis Zamperini volunteered for the army before Pearl Harbor and was thrust into the violent combat of World War II as a B-24 bombardier. While on a rescue mission, his plane went down in the middle of the Pacific Ocean, where he survived, against all odds, drifting two thousand miles in a small raft for forty-seven days. His struggle was only beginning: Zamperini was captured by the Japanese and, for more than two years, he courageously endured torture and psychological abuse in a series of prisoner-of-war camps. He returned home to face more dark hours, but in 1949 Zamperini's life was transformed by a spiritual rebirth that would guide him through the next sixty-five years of his long and happy life" -- Provided by publisher.
Run for your life. The family rules -- Anyone can turn their life around -- The difference between attention and recognition is self-esteem -- It's not how you win, it's how you lose -- A race isn't over until i's over -- Be prepared. Preparation determines your survival -- My survival kit -- Keep your mind sharp -- Don't forget to laugh -- Trust your instincts -- Don't give up, don't give in. You are the content of your character -- Never let anyone destroy your dignity -- Hate is a personal decision -- The true definition of hero -- Attitude is everything. You must have hope -- Don't ask why, ask what's next -- You choose how to view your fate -- The secret of contentment -- After the war : still lost. You can't run (or sail) away from yourself -- Don't leave the crucial details to others -- There's always an answer to everything. You need a cloud to have a silver lining -- Know when you've done all you can do -- The gangster and the gospel -- Give back. It takes a camp to help a child -- First you listen -- Get their attention -- Accomplishment is the key to self-respect -- My private reward -- The mission that never ends -- What I've learned. Always challenge yourself -- Learn to adapt -- Commitment and perseverance pay off -- You're only as old as you feel -- Free advice -- Lessons of the Olympic spirit. It's about people -- You've got to train to carry a torch -- Forgiveness is the healing factor -- Remember me this way. A charitable heart.

The power of self-coaching : the five essential steps to creating the life you want
Author: Luciani, Joseph J
1165944

Reinventing yourself : how to become the person you've always wanted to be
Author: Chandler, Steve 1944-
1112692

The courage to be brilliant : how five acts of improvement a day will make you shine
Author: Monahan, Marta
1045238

More balls than hands : juggling your way to success by learning to love your mistakes
Author: Gelb, Michael
1112512

I had it all the time : when self-improvement gives way to ecstasy
Author: Cohen, Alan
1172703

The four tendencies : the indispensable personality profiles that reveal how to make your life better (and other people's lives better, too)
Author: Rubin, Gretchen
1028985