Recommend title
Description:
"Was the Iraq war really about oil? As a senior oil adviser for the Office for Reconstruction and Humanitarian Assistance (ORHA) and briefly as minister of oil, Gary Vogler thought he knew. But while doing research for a book about his experience in Iraq, Vogler discovered that what he knew was not the whole story -- or even the true story. The Iraq War did have an oil agenda underlying it, one that Vogler had previously denied. This book is his attempt to set the record straight. Iraq and the Politics of Oil is a fascinating behind-the-scenes account of the role of the US government in the Iraqi oil sector since 2003. Vogler describes the prewar oil planning and the important decisions made during hostilities to get Iraqi oil flowing several months ahead of schedule. He reveals how, amid the instability of 2006 (largely fueled by the arrogance of early US decisions), the fixing of the Bayji Refinery contributed significantly to the success of the oil sector in the Sunni part of northern Iraq during and after the surge. Vogler gives us an expert insider's view of the largest oil field auctions in the history of the international oil industry, and his account shows how US Forces' focus on a single Iraqi point of failure in 2007 was a primary factor in the record productions and exports of 2012 through 2017. But under the successes so deftly chronicled here, a darker political narrative finally emerges, one that reaches back to the decision to go to war with Iraq. Uncovering it, Vogler revises our understanding of what we were doing in Iraq, even as he gives us a critical, close-up view of that fraught enterprise." -- Dust jacket.
American oil minister -- Contingency planning for the oil sector -- ORHA start-up : Lieutenant General Jay Garner is the first civilian leader -- Iraqi oil sector : history, resources, and organization -- Adjusting the oil plan -- Penalizing Syria : why so important? -- Finding gold in Baghdad : oil ministry leadership -- The calm before the storm : June 2003 -- The long hot summer of 2003 -- The bizarre top priority -- Task Force Shield : securing the oil sector -- Changing of the guard : oil ministry and CPA oil change -- CPA closes out : June 2004 -- A break between tours : 2004 to 2006 -- Energy fusion cell : fixing the oil sector -- The Bayji Refinery and the surge -- The southern export project -- The bid rounds : oil field auctions -- Leaving Iraq : September 2011 -- What haunts me -- Epilogue.

Iraq in fragments : the occupation and its legacy
Author: Herring, Eric
1107386

Occupying Iraq : a history of the Coalition Provisional Authority
1032248

Revolt on the Tigris : the Al-Sadr uprising and the governing of Iraq
Author: Etherington, Mark
1047589

Iraq in transition : the legacy of dictatorship and the prospects for democracy
Author: Munson, Peter J 1975-
1029771

Iraq and the international oil system : why America went to war in the Gulf
Author: Pelletiere, Stephen C
1044965

The scramble for African oil : oppression, corruption and war for control of Africa's natural resources
Author: Yates, Douglas A 1964-
954977 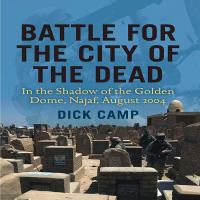 Battle for the city of the dead : in the shadow of the golden dome, Najaf, August 2004
Author: Camp, Richard D
Sign in
Forgot your PIN code?