Recommend title
Description:
"More than four billion people--some 60 percent of humanity--live in debilitating poverty, on less than $5 per day. The standard narrative tells us this crisis is a natural phenomenon, having to do with climate, geography, and culture. It tells us all we have to do is give aid to help poor countries up the development ladder. If poor countries would only adopt the right institutions and economic policies, they could join the ranks of the rich world. Anthropologist Jason Hickel argues that this story ignores the broader political forces at play. Global poverty--and the growing inequality between the rich countries of Europe and North America and the poor ones of Africa, Asia, and South America--has come about because the global economy has been designed over the course of five centuries to favor the interests of the most powerful nations. Global inequality is not natural, inevitable, or accidental. To close the divide, Hickel proposes dramatic action rooted in real justice: abolishing debt burdens in the global South, democratizing the institutions of global governance, and rolling out an international minimum wage, among other steps. Only then will we have a chance at a world built on equal footing."--Jacket.
Preface. Beginnings -- pt. 1. The divide. The development delusion -- The end of poverty ... has been postponed -- pt. 2. Concerning violence. Where did poverty come from? : a creation story -- From colonialism to the coup -- pt. 3. The new colonialism. Debt and the economics of planned misery -- Free trade and the rise of the virtual senate -- Plunder in the 21st century -- pt. 4. Closing the divide. From charity to justice -- The necessary madness of imagination.

Our Declaration : a reading of the Declaration of Independence in defense of equality
Author: Allen, Danielle S 1971-
1052507

The rise and fall of nations : forces of change in the post-crisis world
Author: Sharma, Ruchir
1143366

The future of the global order : the six paradigm changes that will define 2050
Author: Petit, Vincent
1152202

Canadian society : meeting the challenges of the twenty-first century
1193605

Divided : the perils of our growing inequality
1150437 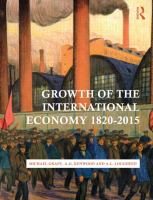 Global capitalism : its fall and rise in the twentieth century
Author: Frieden, Jeffry A
Sign in
Forgot your PIN code?