Skip to Content
Sign In
Advanced search
5
Go to first page   Go to previous page   1 2 3 4 5 Go to next page   Go to last page
Back to list
1172817
Book Globalization and its discontents revisited : anti-globalization in the era of Trump / Joseph E. Stiglitz.

Recommend title
Description:
"In this crucial expansion and update of his landmark bestseller, renowned economist and Nobel Prize winner Joseph E. Stiglitz addresses globalization's new discontents in the United States and Europe. Immediately upon publication, [this book] became a touchstone in the globalization debate by demonstrating how the International Monetary Fund, other major institutions like the World Bank, and global trade agreements have often harmed the developing nations they are supposedly helping. Yet globalization today continues to be mismanaged, and now the harms -- exemplified by the rampant inequality to which it has contributed -- have come home to roost in the United States and the rest of the developed world as well, reflected in growing political unrest. With a new introduction, major new chapters on the new discontents, the rise of Donald Trump, and the new protectionist movement, as well as a new afterword on the course of globalization since the book first appeared, Stiglitz's powerful and prescient messages remain essential reading" -- Publisher's description.
Introduction -- Acknowledgments -- Part I. Globalization and the new discontents. The failures of globalization -- The multiple dimensions of globalization -- The new protectionism -- Can globalization be saved? : an agenda for equitable globalization with shared prosperity -- Part II. Globalization and its discontents (2002 edition). The promise of global institutions -- Broken promises -- Freedom to choose? -- The East Asia crisis : how IMF policies brought the world to the verge of a global meltdown -- Who lost Russia? -- Unfair fair trade laws and other mischief -- Better roads to the market -- The IMF's other agenda -- The way ahead -- Afterword to the 2017 edition.

The great divide : unequal societies and what we can do about them
Author: Stiglitz, Joseph E
1051233

The euro : how a common currency threatens the future of Europe
Author: Stiglitz, Joseph E
1191089

Rewriting the rules of the European economy : an agenda for growth and shared prosperity
Author: Stiglitz, Joseph E

Brother, can you spare a billion? : the United States, the IMF, and the international lender of last resort
Author: McDowell, Daniel
1019725

Globalization : tame it or scrap it? : mapping the alternatives of the anti-globalization movement
Author: Buckman, Greg 1960-
1029983

The globalization paradox : democracy and the future of the world economy
Author: Rodrik, Dani
1097329

Money and the postwar world : the story of the United Nations Monetary and Financial Conference.
1028571

Laid low : inside the crisis that overwhelmed Europe and the IMF
Author: Blustein, Paul
1151867

Taking trade to the streets : the lost history of public efforts to shape globalization
Author: Aaronson, Susan A
1174801

Uncle Sam and us : globalization, neoconservatism, and the Canadian state
Author: Clarkson, Stephen
983924 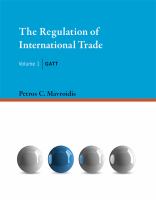 The architecture of collapse : the global system in the 21st century
Author: Guillen, Mauro F
1051079

Weaving the net : conditional engagement with China
Sign in
Forgot your PIN code?