Skip to Content
Sign In
Advanced search
9380
Go to first page   Go to previous page   7 8 9 10 11 Go to next page   Go to last page
Back to list
1172582
Book Australian soldiers in South Africa and Vietnam : words from the battlefield / Effie Karageorgos.

Recommend title
Description:
"The South African and Vietnam Wars provoked dramatically different reactions in Australians, from pro-British jingoism on the eve of Federation, to the anti-war protest movements of the 1960s. In contrast, the letters and diaries of Australian soldiers written while on the South African and Vietnam battlefields reveal that their reactions to the war they were fighting were surprisingly unlike those on the home fronts from which they came. Australian Soldiers in South Africa and Vietnam follows these combat men from enlistment to the war front and analyses their words alongside theories of soldiering to demonstrate the transformation of soldiers as a response to developments in military procedure, as well as changing civilian opinion. In this way, the book illustrates the strength of a soldier's link to their home front lives."--
The wars in Australia -- Initial impressions of the war and the war front -- The impact of the military structure -- Morale: the psychology of combat -- Morale: the role of diversions -- Soldiers and the home front.

Australia at the front : a colonial view of the Boer War
Author: Wilkinson, Frank
955944

Tommy Cornstalk : being some account of the less notable features of the South African war from the point of view of the Australian ranks
Author: Abbott, J. H. M 1874-1953.
1102225

Words by an eyewitness : the struggle in Natal
Author: Linesman
1034900

From Aldershot to Pretoria : a story of Christian work among our troops in South Africa
Author: Sellers, W. E
980595 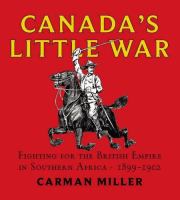 The struggle of the Dutch Republics : a great crime : (an appeal to the conscience of the British nation)
Author: Boissevain, Charles 1842-1927.
Sign in
Forgot your PIN code?