Recommend title
Description:
Consists of maps and basic terrain information of selected areas in the Far East including China, Korea and Japan. Provides interpretation of the terrain and its effect on observation, fields of fire, cover, concealment, obstacles, trafficability and avenues of approach. Included are such engineering aspects as surface materials, suitability for road and airfield construction and water resources.

Monograph on military geography of the U.S
996591 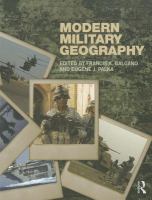 The military geography of Southeast Asia and Australasia
1085180

Military geography of the Sino-Soviet border
1074449

Battling the elements : weather and terrain in the conduct of war
1078994

Geographic monograph of the Lesser Sunda Islands, the Molukka Islands and New Guinea
956655

The outlines of military geography
Author: MacDonnell, A C
920685 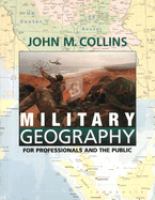 The strategic geography of the great powers : (based on a lecture delivered during 1917 to officers of the grand fleet and of the British armies in France)
Author: Cornish, Vaughan 1862-1948.
947821

Military geography : lectures in the Department of Military Art, delivered before the class of officers at the U.S. Infantry and Cavalry School, Fort Leavenworth, Kansas, 1893-1895.
Sign in
Forgot your PIN code?