Recommend title
Description:
This paper describes the quality of the American Army, an all-volunteer force whose premier status is due to the sacrifice of the Soldiers -- the centerpiece of the Army. Given the scope of their sacrifice, Soldiers have a reasonable right to expect that adequate resources will be available to help them make their eventual transition from military to civilian life. Soldier for Life (SFL), a program established by the Army, works to provide opportunities for Soldiers who are in transition. SFL does not provide new services to transitioning Soldiers; it synchronizes the existing resources, making them more accessible to the individual Soldier, retired Soldier, veteran and family member. Without efforts such as this, the quality of America's all-volunteer Army could suffer; it is a quality underpinned by the faith and trust of these servicemembers that their country will honor their commitment, selfless service and sacrifice by helping them to succeed in transitioning to civilian life.
Introduction -- Background -- Ongoing initiatives -- What is needed -- Conclusion.

Transition from military to civilian life : how to plan a bright future now for you and your family
Author: Dethlefsen, Merle
978729

Encyclopedia of the veteran in America
955089

The role of the Department of Defense in preparing airmen for transition from military to civilian life
Author: King, William J
1061876

A guide to the analysis of the factors involved in the military retiree readjusting to civilian status
Author: McClintock, Ernest LeRoy
992428

Life after the military : a handbook for transitioning veterans
Author: Hill, Janelle
1100016

Residences of officers of the U.S. Army (including retired officers) in San Francisco and vicinity
915555

Living with no excuses : the remarkable rebirth of an American soldier
Author: Galloway, Noah 1981-
1119006 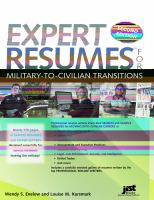 Out of uniform : your guide to a successful military-to-civilian career transition
Author: Wolfe, Tom 1950-
Sign in
Forgot your PIN code?