Recommend title
Description:
"The contemporary trend is for conflicts to be waged below the level of total war, with an alarming proclivity visible amongst the contestants to ignore, or at best pay lip-service only, to the humaneness enshrined as an irrevocable constant in a 'fair war'. Military forces are now preparing to meet and defeat adversaries who are not the traditional foes of nations ... but irregular forces that depend on asymmetry, terrorism, guerrilla tactics, insurgencies and criminal activities to question the legitimacy of a nation state for reasons of ideology, both political and religious ... This book is a compilation of disparate thoughts, but all on the same subject -- the employment of air power against non-state entities committed to violent action against the state"--Preface.
The war of the running dogs : the Malayan emergency / Mark Lax -- Offensive air power in counterinsurgency operations : putting theory into practice / Glen Beck -- Air power and special forces : a symbiotic relationship / David Jeffcoat -- Taking it to the streets : exploding urban myths about Australian air power / Gareth B.S. Neilson -- Air power and transnational terrorism : the possibilities, advantages and limits to using Australian air power in the 'War on Terror' / Sam Gray-Murphy -- The role of air power in irregular warfare : an overview of the Israeli experience / Sanu Kainikara.

Unconventional warfare in support of airborne, amphibious, and armored operations
1139246

Special warfare, U. S. Army : an Army specialty.
Author: United States. Department of the Army. Office of the Chief of Information
1082454 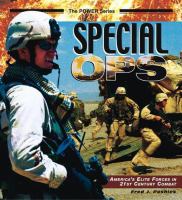 Special operations in peace and war
Sign in
Forgot your PIN code?