Recommend title
Description:
Much can be learned today about the nature of irregular warfare, the author argues, from the experiences of the United States and the other protagonists in Central America during the final decade of the Cold War. This strategy and policy analysis examines origins, dynamics, and termination of the Sandinista insurrection in Nicaragua, the Salvadoran government's decade-long counterinsurgency against the FMLN guerrillas, and the Contra insurgency against the Sandinista. Todd Greentree establishes historical, political, and conceptual relationship between U.S. involvement in the Central American wars, the Vietnam War, and the current conflicts in Iraq and Afghanistan, and then develops a general analytical framework for understanding the fundamental and recurring nature of insurgency, counterinsurgency, and intervention. Greentree cites U.S. involvement in Central America during the 1980s as clearly demonstrating costs, risks, and limits to intervention and use of force in internal conflicts and warns that the consequences of such involvement must not be forgotten--Publisher's description.
1. Introduction: The strategy and policy of intervention in Central America -- 2. What was at stake? -- 3. The problem of limits -- 4. The fall of Somoza and the triumph of the Sandinista -- 5. Reform with repression in El Salvador -- 6. The Contra War -- 7. Every war must end -- 8. Aftermath and epilogue.

The United States and the politics of conflict in the developing world : a policy study
Author: Greentree, Todd R
1085170

The United States and the politics of conflict in the developing world
Author: Greentree, Todd R

Insurgency and counterinsurgency in Central America
Author: Charters, David A 1949-
1071096

Criminal insurgencies in Mexico and the Americas : the gangs and cartels wage war
997129 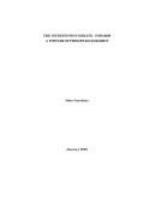 The intervention debate : towards a posture of principled judgment
Author: Garofano, John
926081

Congress, the President, and the United Nations : UN peacekeeping and the politics of military intervention
Author: Deese, Patricia Jacobs
952006