Recommend title
Description:
The people at the top of American national security establishment, the President and his principal advisors, the core team at the helm of the National Security Council, are the most powerful committee in the history of the world.Yet, in many respects, they are among the least understood. David Rothkopf served with and knows personally many of the NSC's key players of the past twenty-five years. In this book he pulls back the curtain on this shadowy world to explore its inner workings, its people, their relationships, their contributions and the occasions when they have gone wrong. He traces the group's evolution from the final days of the Second World War to the post-Cold War realities of global terror, exploring its triumphs, its human dramas and most recently, what many consider to be its breakdown at a time when we needed it most. Drawing on an extraordinary series of insider interviews with policy makers including Condoleezza Rice, Colin Powell, Henry Kissinger, senior officials of the Bush Administration, and over 130 others, the book offers unprecedented insights into what must change if America is to maintain its unprecedented worldwide leadership in decades ahead--Publisher's description.
1. The committee in charge of running the world -- 2. Washington's choice -- 3. Greatness thrust upon them -- 4. Gulliver embarks : leaders, leadership, and the difference between the two -- 5. Bound in Lilliput -- 6. America in decline, the NSC ascendant -- 7. A superpower in search of itself -- 8. Morning in America, twilight at the NSC -- 9. Across a bright line in history -- 10. The new, improved, post-Cold War, information-age, indispensable nation -- 11. The beginning of the end of the end of history -- 12. A thumb on the scales : tipping the balance in the battle between the traditionalists and the transformationalists -- 13. U.S. foreign policy in the age of ambiguity. 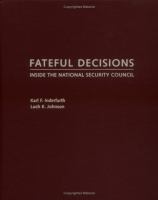 Current operations of the NSC Section
947922

The relationship of the Joint Chiefs of Staff to the National Security Council
Author: Vail, James M
1130895

Keepers of the keys : a history of the National Security Council from Truman to Bush
Author: Prados, John
1187823

The development of political-military consultation in the United States
Author: May, Ernest R
1082813

The presidency and the management of national security
Author: Lord, Carnes
1194020