Recommend title
Description:
For decades, events in Central and South America have rarely broken through the consciousness of any administration, let alone the American people. Were it not for illegal immigration or drug busts, there would be almost no news from Latin America on mainstream television. Globally, only the unpopulated Antarctic seems to have less coverage. Although information on pending trouble and catastrophe, has been resident inside the intelligence community and there have been individuals shouting warnings, most tragically fell upon is falling on deaf ears. Similarly, today the necessary information about discordant events throughout Latin America is available to the intelligence community and policymakers. The time has passed in ignoring a tinder box ready to ignite and for executing minor, disjointed tactical interventions. Rather, the United States needs a strategic shift in policy if we are to foster harmonious relations with our southern neighbors and hope to stem the tide of a far larger infestation of crime and terrorism. John Alexander discusses multinational concerns and major demographic and political shifts that are already occurring in this region and why they are important to North American national interests. Included are international issues that combine social, economic, political, and security factors that should be of concern to everyone. He artfully connects the dots that clearly indicate that the generally unrecognized tensions in Latin America are integrally intertwined with global issues.
Maps -- Introduction -- The imperative -- Setting the stage -- Concepts without borders -- Insights -- Summary.

Winning the war : advanced weapons, strategies, and concepts for the post-9/11 world
Author: Alexander, John B
974030

Legacies of state violence and transitional justice in Latin America : a Janus-faced paradigm?
1051189

Drug trafficking, organized crime, and violence in the Americas today
916179

Dangerous liaisons : organized crime and political finance in Latin America and beyond
1195216

Reconceptualizing security in the Americas in the twenty-first century
1193719

Violence in Latin America and the Caribbean : subnational structures, institutions, and clientelistic networks
1047837 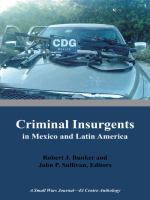