Recommend title
Description:
"In Fighting Words, award-winning author Richard F. Miller ... looks to some of history's most successful battle speechmakers to answer the age-old question of how. How did Pope Urban II's speech convince tens of thousands of Europeans to wage the First Crusade, a dangerous, and for many, a one-way journey to Jerusalem? How did George Patton's speech transform the green kids of the Third Army into the terror of the Third Reich? How did the words of General David Patraeus resurrect a losing war effort in Iraq and in the process, retrain his soldiers for a new kind of war? Miller argues that human persuasion is seamless and that the persuasive strategies by which men (and increasingly women) are recruited, trained and exhorted for war can be applied to politics and business"--Dust jkt.
pt. 1. The speaker is the speech. The meme becomes the man : Grant in the Wilderness -- Living symbols : Pope Urban II calls for the First Crusade -- George Washington quells the Newburgh Mutiny -- pt. 2. Speechmakers and their audiences. Patton maintains his memes : thespian in uniform -- The directors : Sam Houston (and "Deaf" Smith) at San Jacinto -- Failing performer : Alexander the Great at the Hyphasis River -- pt. 3. The surge : three battle speeches by General David H. Petraeus. General David H. Petraeus assumes command -- Midst-of-battle speech : Petraeus as therapist-in-chief -- Petraeus bids farewell : the final narrative -- pt. 4. Failure. John Pope and the failure to transcend self -- Stand or die : General Walton Walker in Korea -- Beyond rhetoric : evil and the failure of battle speeches -- pt. 5. Speechlets. Cut and paste : the origin of two modern speechlets -- A long journey : from recollection to legend -- The short journey of a modern speechlet : "last" words to immortal words -- pt. 6. Three speeches by President Barack Obama. Assumption of command : inaugural address, January 20, 2009 -- Midst-of-battle speech : health care and the address to Congress, September 9, 2009 -- The military eulogy : commemorating the slain of Fort Hood, November 10, 2009. 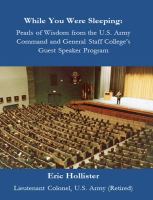 While you were sleeping : pearls of wisdom from the U. S. Army Command and General Staff College's guest speaker program
Author: Hollister, Eric A
999860

A treasury of the world's great speeches : Each speech prefaced with its dramatic and biographical setting and placed in its full historical perspective.
Author: Peterson, Houston 1897-
1102428 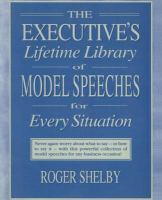 The executive's lifetime library of model speeches for every situation
Author: Shelby, Roger
1023185

A Churchill reader : the wit and wisdom of Sir Winston Churchill,constructed from his own sayings and writings and framed with an introduction by Colin R. Coote, with the collaboration of P. D. Bunyan.
Author: Churchill, Winston 1874-1965.
1127252 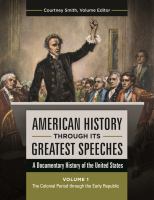 American history through its greatest speeches : a documentary history of the United States
982865

Selected speeches of Dwight David Eisenhower, 34th President of the United States : selected from the three principal periods of his life: as Supreme Allied Commander in Europe during the war years, as Supreme NATO Commander [and] as President.
Author: Eisenhower, Dwight D 1890-1969,
Sign in
Forgot your PIN code?