Recommend title
Description:
This dissertation is an examination of the 1909 military revolt in Greece, the political circumstances that led to the revolt, and the ramifications the revolt would have on 20th century politics in Greece.
Introduction : 1821-1907 -- January 1908-August 1909 : the military's decision to intervene -- September 1909-December 1909 : the difficulties of military leadership -- January 1910-March 1910 : the withdrawal of the military from politics -- Conclusion : 1910-1970. 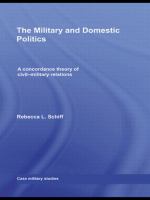 Melancholy reunion : a report from the future on the collapse of civil-military relations in the United States
Author: Dunlap, Charles J
990339

To sheathe the sword : civil-military relations in the quest for democracy
1145502

Coercion and governance : the declining political role of the military in Asia
1154990