Skip to Content
Sign In
Advanced search
393
Go to first page   Go to previous page   1 2 3 4 5 Go to next page   Go to last page
Back to list
1101573
Book Mission Al Jazeera : build a bridge, seek the truth, change the world / Josh Rushing, in collaboration with Sean Elder.

Recommend title
Description:
Blending his personal story with innovative ideas about how to win the war on terror, former marine turned Al Jazeera reporter Josh Rushing addresses all the issues he was not allowed to talk about when he was in uniform. If we are to win the war on terror, Rushing explains, we have to interact with the media at home and abroad in order to control the way we are perceived. By refusing to appear on Al Jazeera, Western leaders allow people who disagree with the current administration to represent the West to the Arab world in a skewed, negative way. By taking readers inside Al Jazeera, Rushing offers a unique behind-the-scenes look at the controversial news channel and shows how the West can harness it to its advantage, relay a positive message to the Arab public, and hear what it has to say in return.
Introduction: Rushing's Story -- The Evolution of Western Media’s Vision of the Middle East -- Free Media In the Middle East? -- The Western Media Reports the War on Terror -- Reporting the War to the Arab Street -- Perceptions of War -- Communicating Effectively In The War Of Ideas -- Winning The War on Terror with the Help of Al-Jazeera.

Big story : how the American press and television reported and interpreted the crisis of Tet 1968 in Vietnam and Washington
Author: Braestrup, Peter
974255 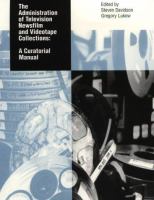 The administration of television newsfilm and videotape collections : a curatorial manual
1084328

A comparison of network television news coverage and audiences : the war in Vietnam, February to May 1970
Author: Shelton, John
1021207

Truth and duty : the press, the President, and the privilege of power
Author: Mapes, Mary
1047836

Big story : how the American press and television reported and interpreted the crisis of Tet 1968 in Vietnam and Washington
Author: Braestrup, Peter
1102309

Big story : how the American press and television reported and interpreted the crisis of Tet 1968 in Vietnam and Washington
Author: Braestrup, Peter
Sign in
Forgot your PIN code?