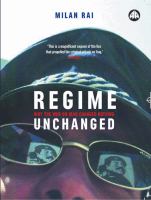 Recommend title
Description:
"Regime Unchanged reveals that the British government was forced to frantically draw up contingency plans to withdraw from the US invasion force only days before the war was due to begin -- because of the power of the British and global anti-war movements ... Regime Unchanged documents how Washington undermined and finally shut down the UN weapons inspectors' efforts to disarm Iraq peacefully -- just as they were on the brink of a new and decisive phase of inspections. Milan Rai presents ... evidence that Ba'athists were deliberately restored to power. In the confusion of the first month of Iraq's 'liberation', Britain and the US pursued a path very similar to that taken in liberated territories after WWII : demobilization of resistance movements, and the restoration of collaborators and fascists. Regime Unchanged demonstrates that this was not a war for disarmament, or for 'regime change', but a war for power"--Back cover.
Introduction : Tony Blair wobbled : we nearly derailed the war -- Argument over : the war was wrong -- "Regime change" : a prior commitment -- First strike : the February 2001 bombing of Baghdad -- Sickly inhibitions : the political significance of 11 September -- George Bush lied : misconnecting Iraq, WMD and terrorism -- The first ultimatum : the five demands -- Disaster strikes : Iraq accepts the weapons inspectors -- The minefield : Resolution 1441 : designed to be refused -- No smoke, no gun : no evidence discovered -- Colin Powell lied : turning on the inspectors -- Inspection was an option : qualitative disarmament -- Blitzing Dr. Blix : UNMOVIC resists -- The censored document : destroying the inspectors -- Authority and power : US/UK versus the UN -- Regime reloaded : re-Nazifying Iraq -- Hitler won : false de-Nazification -- Coup dÉtat : the US wanted a coup -- Why "regime stabilization : Turkey and Saudi Arabia need Saddamism -- Crushing the resistance : After WWII : betraying the anti-fascists -- Regime revolutions : de-Ba'athification? -- Shina power : a looming confrontation with the people of Iraq -- Sunni rage : after Falluja -- Capitalism's war -- Regime unchanged -- Postscript : what would you have done?

Weapons of mass deception : the uses of propaganda in Bush's war on Iraq
Author: Rampton, Sheldon 1957-
997615 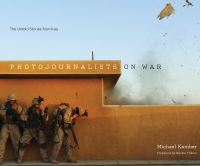 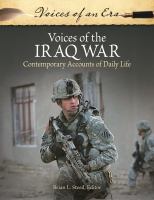 Voices of the Iraq war : contemporary accounts of daily life
1025744

Going to war in Iraq : when citizens and the press matter
Author: Feldman, Stanley
Sign in
Forgot your PIN code?