Recommend title
Description:
"Promoting democracy has long been a priority of Western foreign policy. In practice, however, international attempts to expand representative forms of government have been inconsistent and are often perceived in the West to have been failures. The states of Central Asia, in particular, seem to be 'democracy resistant,' and their governments have continued to support various forms of authoritarianism in the decades following the Soviet Union's collapse. In Democracy in Central Asia, Mariya Omelicheva examines the beliefs and values underlying foreign policies of the major global powers -- the United States, the European Union, Russia, and China -- in order to understand their efforts to influence political change in Kazakhstan, Kyrgyzstan, and Uzbekistan. Omelicheva has traveled extensively in the region, collecting data from focus groups and public opinion surveys. She draws on the results of her fieldwork as well as on official documents and statements of democracy-promoting nations in order to present a provocative new analysis. Her study reveals that the governments and citizens of Central Asia have developed their own views on democracy supported by the Russian and Chinese models rather than by Western examples. The vast majority of previous scholarly work on this subject has focused on the strategies of democratization pursued by one agent such as the United States or the European Union. Omelicheva shifts the focus from democracy promoters' methods to their message and expands the scope of existing analysis to include multiple sources of influence. Her fresh approach illuminates the full complexity of both global and regional notions of good governance and confirms the importance of social-psychological and language-based perspectives in understanding the obstacles to expanding egalitarianism"--Publisher's web site.
Introduction -- Political regimes in Central Asia : two decades after independence -- A framing perspective on democracy promotion -- Western perspectives on democracy in Central Asia -- Models of governance promoted by Russia and China -- Central Asian democracy frames -- Democracy in the public eye -- Assessing the effectiveness of democracy promotion frames -- Conclusion.

Conflict, cleavage, and change in Central Asia and the Caucasus
993831

The end of Romanian exceptionalism : an epitaph for the third way
Author: Tismaneanu, Vladimir
1164808

Central and East European politics : from communism to democracy
993570

The Consolidation of democracy in East-Central Europe
989177

The ideas that conquered the world : peace, democracy, and free markets in the twenty-first century
Author: Mandelbaum, Michael
1110452 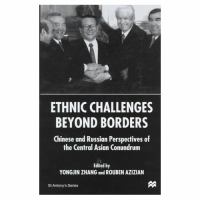 Ethnic challenges beyond borders : Chinese and Russian perspectives of the Central Asian conundrum
1045515

The formless empire : a short history of diplomacy and warfare in Central Asia
Author: Mott, Christopher
1033526

Engaging with Russia : the next phase : a report to the Trilateral Commission
Author: Lyne, Roderic
1014546

Regional security and the future of Central Asia : the competition of Iran, Turkey, and Russia
Author: Peimani, Hooman 1957-
Sign in
Forgot your PIN code?