Recommend title
Description:
"Matthew Carr offers an ... assessment of the impact Sherman's policies have had on subsequent wars, including in the Philippines, World War II, Korea, Vietnam, and even Iraq and Afghanistan. Sherman's Ghosts opens with a ... retelling of General Sherman's fateful decision to turn his sights on the South's civilian population in order to break the back of the Confederacy. Carr then exposes how this strategy became the central preoccupation of war planners in the twentieth century and beyond"--Dust jacket.
Introduction : from Georgia to FM 3-24 -- part 1. The March. The iron hand of war -- Uncle Billy's war -- The destruction machine -- Civilians and soldiers -- "More perfect peace" -- part 2. Legacies. Soldiers -- Civilians -- The new American way of war -- Wars without war -- Epilogue.

Sherman's historical raid : the memoirs in the light of the record : a review based upon compilations from the files of the War Office
Author: Boynton, Henry V 1835-1905.
1042240

Marching through Georgia : the story of soldiers and civilians during Sherman's campaign
Author: Kennett, Lee B
1103362 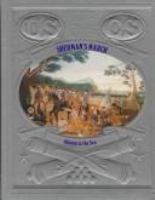 Demon of the lost cause : Sherman and Civil War history
Author: Moody, Wesley
1070286

"A pretty rough time and one of the hardest battles of the war" : the battle of Griswoldville and the Army of the Tennessee on Sherman's March to the Sea
Author: Cubbison, Douglas
943900

The general who marched to hell : William Tecumseh Sherman and his march to fame and infamy
Author: Miers, Earl Schenck 1910-1972.
948508

The march to the sea and beyond : Sherman's troops in the Savannah and Carolinas campaigns
Author: Glatthaar, Joseph T 1956-
959737