Skip to Content
Sign In
Advanced search
233
Go to first page   Go to previous page   8 9 10 11 12 Go to next page   Go to last page
Back to list
1047207
Book Iran-Contra : Reagan's scandal and the unchecked abuse of presidential power / Malcolm Byrne ; foreword by Bruce Riedel.

Recommend title
Description:
"Everything began to unravel on October 5, 1986, when a Nicaraguan soldier downed an American plane carrying arms to 'Contra' guerrillas, exposing a tightly held U.S. clandestine program. A month later, reports surfaced that Washington had been covertly selling arms to Iran (our sworn enemy and a state sponsor of terrorism), in exchange for help freeing hostages in Beirut. The profits, it turned out, were going to support the Contras, despite an explicit ban by Congress. In the firestorm that erupted, shocking details emerged, raising the prospect of impeachment, and the American public confronted a scandal as momentous as it was confusing. At its center was President Ronald Reagan amid a swirl of questions about illegal wars, consorting with terrorists, and the abuse of presidential power. Yet, despite the enormity of the issues, the affair dropped from the public radar due to media overkill, years of legal wrangling, and a vigorous campaign to forestall another Watergate. As a result, many Americans failed to grasp the scandal's full import. Through ... [the] use of declassified documents, previously unavailable investigative materials, and wide-ranging interviews, Malcolm Byrne revisits this largely forgotten and misrepresented episode. Placing the events in their historical and political context (notably the Cold War and a sharp partisan domestic divide), he explores what made the affair possible and meticulously relates how it unfolded--including clarifying minor myths about cakes, keys, Bibles, diversion memos, and shredding parties. Iran-Contra demonstrates that, far from being a 'junta' against the president, the affair could not have occurred without awareness and approval at the very top of the U.S. government. Byrne reveals an unmistakable pattern of dubious behavior--including potentially illegal conduct by the president, vice president, the secretaries of state and defense, the CIA director and others--that formed the true core of the scandal. Given
the lack of meaningful consequences for those involved, the volume raises critical questions about the ability of our current system of checks and balances to address presidential abuses of power, and about the possibility of similar outbreaks in the future"--Dust jacket.
Preface : settings for the scandal -- Acknowledgments -- Introduction -- Raising the Contras -- Coping with Iran -- Taking over the covert war -- TOW Missiles to Tehran -- Quid pro quos -- HAWKS -- Tightening the reins on the Contras -- A neat idea -- Air Contra -- Road to Tehran -- Meltdown -- Blowback -- The early cover-up -- Congress steps in -- The independent counsel.

Ronald Reagan : the power of conviction and the success of his presidency
Author: Wallison, Peter J
964785

Men of zeal : a candid inside story of the Iran-Contra hearings
Author: Cohen, William S
1099632 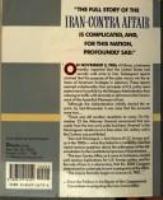 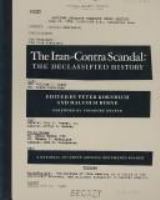 The Iran-Contra scandal : the declassified history
929524

Terry Waite and Ollie North : the untold story of the kidnapping-- and the release
Author: Hewitt, Gavin
1134118

The Iranian triangle : the untold story of Israel's role in the Iran-Contra affair
Author: Segev, Samuel 1926-
1047646

The end of authority : how a loss of legitimacy and broken trust are endangering our future
Author: Schoen, Douglas E 1953-
915948