Skip to Content
Sign In
Advanced search
1176
Go to first page   Go to previous page   14 15 16 17 18 Go to next page   Go to last page
Back to list
1045703
Book The relationship between perceived toxic leadership styles, leader effectiveness, and organizational cynicism / by James M. Dobbs.

Recommend title
Description:
Employee cynicism within organizations has become a well-cited topic in the last several years. Within multiple industries, organizational leaders have claimed that cynicism is a factor in employee burnout, emotional exhaustion, and turnover, and that it directly and adversely affects organizational citizenship behavior, commitment, and organization effectiveness. Despite such claims, very little empirical research has been done on the antecedents of employee cynicism, and the influence of leadership behavior on employee cynicism. This study attempted to fill gaps in the research by examining the relationship between perceived toxic leadership behaviors, leader effectiveness and organizational cynicism. Using descriptive and inferential approaches, this study analyzes data from three separate scales: Cynical Attitudes Toward College Scale, Toxic Leadership Scale, and the Multifactor Leadership Questionnaire. Data from these scales, along with demographic data from the participants, were collected through an online survey from 285 cadets enrolled in psychology and leadership courses at the United States Air Force Academy in Colorado Springs, CO between February and May 2013. Results suggest that a relationship exists between toxic leadership styles and cynicism in an organization. Specifically, the study found strong evidence to suggest that Academy cadets who perceive their command officer to have higher levels of toxicity on any of the five dimensions: abusive supervision, authoritarian leadership, narcissism, self-promotion, and unpredictability, tend to be more cynical about their organization. In addition, of the five toxic leadership dimensions, self-promotion was the best predictor of organizational cynicism. Finally, contrary to expectation, study results found no evidence to suggest that effective leadership moderates the relationship between organizational cynicism and toxic leadership. The findings in this study offer empirical evidence in a unique
military context that perceived toxic leaderships styles many be critical antecedents in the formation of organizational cynicism. Given the pernicious impact of cynicism, implications from this study suggest that managers and administrators of organizations should purposefully examine the leadership development, training and opportunities presented to its people in order to stem the tide of undesirable (toxic) behavior among its leadership.

Women as transformational leaders : from grassroots to global interests
1114829

Trust rules : how to tell the good guys from the bad guys in work and life
Author: Stroh, Linda K
1045915

The cynical Americans : living and working in an age of discontent and disillusion
Author: Kanter, Donald L 1925-
1110959

Culture and leadership, across the world : the GLOBE book of in-depth studies of 25 societies
996423 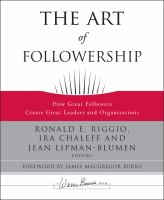 The art of followership : how great followers create great leaders and organizations
1028943

Silos, politics, and turf wars : a leadership fable about destroying the barriers that turn colleagues into competitors
Author: Lencioni, Patrick 1965-
992041

The trustworthy leader : leveraging the power of trust to transform your organization
Author: Lyman, Amy 1956-
941306

Organizational behavior I : essential theories of motivation and leadership
Author: Miner, John B
1043962