Recommend title
Description:
"Islamophobia is the name given to the virulent anti-Islamic prejudice that has been hyped by the news media and seized upon by cynical politicians. Five essays by six specialists on Islam in America provide important insights into Islamophobia as a conflict over American identity during a time of crisis. The authors clarify the way that differences of religion, race, and gender have been used to portray Muslims as threatening "out-groups," just as other minorities (Catholics, Jews, blacks) have been attacked in the past. The result is a thought-provoking analysis of the tactics for denying full citizenship to a minority religious group"--Publisher's web site.
Introduction : the problem of Islamophobia / Carl W. Ernst -- Common heritage, uncommon fear : Islamophobia in the United States and British India, 1687-1947 / Peter Gottschalk and Gabriel Greenberg -- Islamophobia and American history : religious stereotyping and out-grouping of Muslims in the United States / Kambiz GhaneaBassiri -- The Black Muslim scare of the twentieth century : the history of state Islamophobia and its post-9/11 variations / Edward E. Curtis IV -- Center stage : gendered Islamophobia and Muslim women / Juliane Hammer -- Attack of the Islamophobes : religious war (and peace) in Arab/Muslim Detroit / Andrew J. Shryock.

Islamophobia : the challenge of pluralism in the 21st century
996841

Global Islamophobia : Muslims and moral panic in the West
917496

Islam in the European Union : transnationalism, youth and the war on terror
1045180

The Muslims are coming! : Islamophobia, extremism, and the domestic War on Terror
Author: Kundnani, Arun
992350 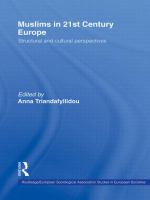