Recommend title
Description:
Records an important chapter in the Korean War, the period from late November 1950 to early July 1951 when battle lines did indeed ebb and flow in pronounced surges. Billy C. Mossman begins with the last weeks of the pell-mell rush of United Nations forces to the Chinese border and goes on to chronicle in great detail the test of American military leadership and resources posed by the taxing retreat of the Eighth Army and X Corps across the frozen wastes of North Korea. He highlights the limitations imposed by terrain and weather on the fighting capabilities of an American army facing surprise attack from a large disciplined enemy. In addition, the operations he describes in such careful detail vivify the principles of war for those with an interest in studying the profession of arms. 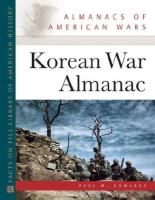 The mistaken history of the Korean War : what we got wrong then and now
Author: Edwards, Paul M
Sign in
Forgot your PIN code?