Leadership and the art of struggle : how great leaders grow through challenge and adversity
Author: Snyder, Steven 1954-
994653

The titleless leader : how to get things done when you're not in charge
Author: Russell, Nan S
917546

Radical inclusion : what the post-9/11 world should have taught us about leadership
Author: Dempsey, Martin E
996051 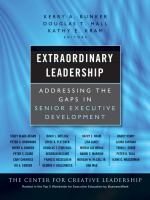 Leadership : understanding the dynamics of power and influence in organizations
992635